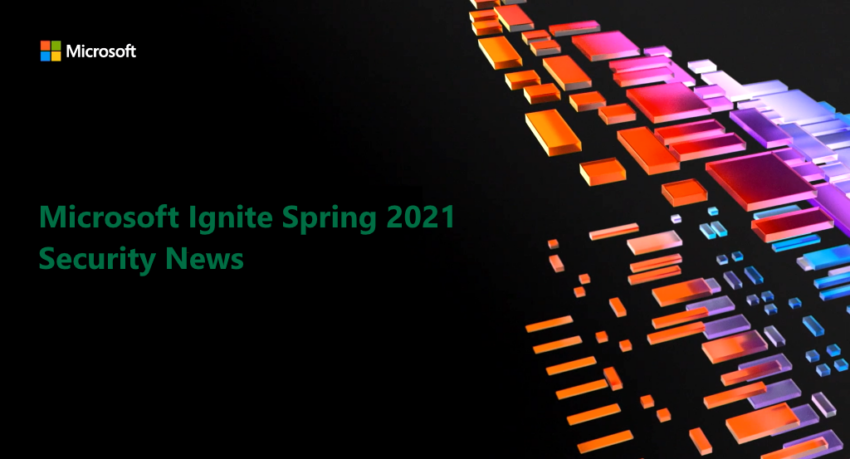 It’s Ignite time. Again! In this post I cover the Microsoft Ignite 2021 security news that have been announced at the second virtual version of Microsoft’s conference.

Passwords are a thing of the past. Even today, I’m working without even knowing my password. FIDO2 and the Authenticator know being GA is a great signal to start using those in combination with Hello for Business depending on the use case.
Temporary Access Pass are now able to fix the boot strap problem we had until now.

User experiences require analytics tools for administrator to make sure they are hassle-free and don’t cause frustration. Also, telemetry can help to find gaps in your current authentication solutions.

Azure AD Conditional Access authentication context is now in preview. This enhancement allow more granular controls based on user actions or the data they are accessing.

While Conditional Access has been the core feature for Zero Trust, it has also been not that flexible. With authentication context, we will be able to get more granular control for certain scenarios.

Working with external users is the new normal. Integrating them as tightly as possible is therefore very welcome.

Unfortunately, access reviews for guests are still linked to pre-defined users and can not be individually assigned to the account that originally created the invite.

Incidents from Microsoft 365 Defender are now synchronized to Azure Sentinel. Each incidents provides the direct link to M365 Defender to investigate in more depth. Incident status and assignments are now also synced between both systems.

While many customers still criticize for the number of security dashboards this might be a step in the right direction. Microsoft 365 Defender and Azure Sentinel are two different tools, however, customers just want an experience that is as simple as possible no matter if its SIEM/SOAR or XDR.

Azure Sentinel now offers over 100 built-in connectors with more than 30 added just now. A list can be found here: https://techcommunity.microsoft.com/t5/azure-sentinel/30-new-azure-sentinel-data-connectors/ba-p/2176315

If you want to learn more about connecting data sources I’d recommend this docs article: https://docs.microsoft.com/en-us/azure/sentinel/connect-data-sources

As a preview, Azure Sentinel Automation helps to simplify common actions based on conditions (e.g. change user assignment or severity). Logic App playbooks can also be used as actions just like they can already be assigned to individual analytics rules. Allowing this at a global level using Automation is a welcome addition.

It’s been a while now since Azure Sentinel was released, still fun to look at the speed it evolves.

Microsoft recently added the new unified experience to the Microsoft 365 security portal often referred to as “portal convergence”. Microsoft 365 Defender can now be used to directly manage, configure, investigate, and remediate across endpoints, email, and identities.

Some features (including the new unified investigation pages) are only available in Microsoft 365 Defender.

This is one of my favorite changes since Microsoft announced the vision for a unified threat protection dashboard at Ignite 2018 which I attended in Orlando. I often asked myself why it took so long, but now we are finally here.

Windows Server 2022 will also provide AES-256 support for SMB as well as improvements to the the Windows Admin Center (v2103), now also available as part of the Azure Portal in a public preview. TLS 1.3 will be enabled by default.

Windows Server 2022 will be generally available later this year. The preview can be downloaded here: https://www.microsoft.com/en-us/software-download/windowsinsiderpreviewserver

“Edge Secured-core” extends this certification by identifying edge IoT devices. This label is part of the Azure Certified Device program, making it easier to select certified devices. As an addition, those will also include built-in support for Azure Defender for IoT.

I’m mostly doing cloud security projects at the moment, but hybrid datacenters are still a thing at most customers. Windows Server 2022 seems to be an evolved version of Server 2019 which is already a reliable and secure OS.

While Microsoft sees Information Protection as a compliance solution, it still has significance for security as well. The following capabilities have now been announced

Co-authoring and AutoSave are now available in preview on Microsoft Information Protection-encrypted documents, even in the full Microsoft 365 desktop apps (Windows and Mac). The function has to be enabled manually and is a one-way task!

On macOS office apps (version 16.44+), client-based automatic and recommended labeling is now available detecting sensitive content. This was already implemented in Microsoft 365 Apps on the web and the Windows Version of Microsoft 365 Apps.

Mandatory labeling is now built-in within Microsoft 365 Apps on all platforms. The Azure Information Protection client is no longer necessary. Customized label policy settings like “Set a different default label for Outlook” and “Exempt Outlook messages from mandatory labeling” will also be respected without the AIP client.

Auditing label activities in Activity Explorer is now filled with data generates by Microsoft 365 Apps also rather than just by the Azure Information Protection Client giving full visibility of all file operations regarding labeling and DLP.

Variables and per-app content marking is now also available natively within the Microsoft 365 Apps on all platforms without the need for the Azure Information Protection client. Web apps will follow soon.

Nice additions regarding Information Protection. Co-authoring on encrypted files is a step into the right direction. Making the Microsoft 365 Apps independent from the Azure Information Protection client will also simplify many deployments. Now on my wish list: full feature support of all configuration options without the AIP client.

That’s it for the Microsoft Ignite 2021 Security news.

Tweets by ChrisOnSecurity
We use cookies on our website to give you the most relevant experience by remembering your preferences and repeat visits. By clicking “Accept”, you consent to the use of ALL the cookies.
Cookie settingsACCEPT
Manage consent

This website uses cookies to improve your experience while you navigate through the website. Out of these, the cookies that are categorized as necessary are stored on your browser as they are essential for the working of basic functionalities of the website. We also use third-party cookies that help us analyze and understand how you use this website. These cookies will be stored in your browser only with your consent. You also have the option to opt-out of these cookies. But opting out of some of these cookies may affect your browsing experience.
Necessary Always Enabled
Necessary cookies are absolutely essential for the website to function properly. This category only includes cookies that ensures basic functionalities and security features of the website. These cookies do not store any personal information.
Non-necessary
Any cookies that may not be particularly necessary for the website to function and is used specifically to collect user personal data via analytics, ads, other embedded contents are termed as non-necessary cookies. It is mandatory to procure user consent prior to running these cookies on your website.
SAVE & ACCEPT